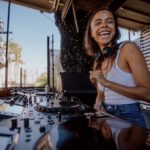 TSHA tinkers with KUU’s late 2020 single, “We’ll Always Have This Dance,” sprucing up the anthemic indie hit with a bobbing club-ready remix. The London producer, named one of Dancing Astronaut‘s Artists to Watch in 2021, preserves much of the original’s winning formula, ranging from its acid undertones to its defining, old-school house chords. TSHA goes on to give the remix a personality of its own though, outfitting it with bellowing bass and intricate yet light and crisp percussion, the latter of which is a growing staple in TSHA’s work.

Pitched up and with a more dynamic approach to its builds than the original, TSHA’s remix of “We’ll Always Have This Dance” feels as eager to hit the clubs as its listeners worldwide. In a press release, KUU commented that TSHA sat at the top of the list to remix the group’s latest track, a preference that comes as no surprise to those familiar with her recent Ninja Tune EP, Flowers. Listen to the new remix in full below.