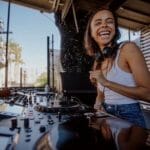 Foreign Family Collective has remained a reliable source of mixes since reinstating “Intermission Broadcast” for a sophomore monthly stretch at the end of 2020. Now, ODESZA’s label is calling in one of Dancing Astronaut‘s Artists to Watch in 2021, TSHA. Following Gilligan Moss‘ March slotting, TSHA plays host to the 14th installment in ODESZA‘s ongoing series.

It was only fitting that Foreign Family recruited TSHA for the next hour-long episode after an appearance on BRONSON’s third and final remix EP. Spanning as many tracks as its installment number, TSHA’s “Intermission” showing strolls through her rework of “KNOW ME” as well as selections from Todd Terry, DJ Duke, James Bangura, and more, serving up the ideal springtime set that only reinforces her induction into the class of artists positioned to impress their signatures on the dance domain in 2021.