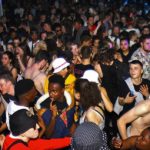 While the UK has had their fair share of illegal raves since the onset of the global COVID-19 pandemic, bystanders found themselves slightly trigger happy when they mistook a vaccination queue for an underground party.

On January 15, a large group of people waiting to receive their vaccines were lined up outside the Essex Freemasons’ Saxon Hall in Southend, which hilariously led a confused pedestrian to alert the police of suspicious rave-like activity. Unfortunately, when the police arrived, not a single techno tune nor dubstep banger was present—only innocent health-concerned citizens.

“It was really funny when the police arrived as they had been notified that there was a ‘rave’ taking place at Saxon Hall—only to find 80 and 90 year-olds on wheelchairs, zimmer frames, and walking sticks, patiently queueing for their vaccinations. Grumpy old men and grumpy old women were in abundance. Nevertheless, as a balancing act many more very appreciative people couldn’t have been more grateful to receive the vaccine and to Saxon Hall and the Freemasons for facilitating it.”

While we are unanimously anxious for live music to return as soon as possible, try not to get too paranoid about it.