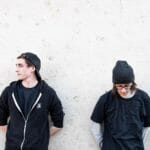 Over the past few years, Ben Bruce and Dylan Gold—known collectively as um..—have been motivated by the following belief: their approach to electronic production is novel—antithetical even—to the established sounds in the dance space. “We don’t want to follow an abused and over saturated path devoid of any creativity or evolution. We have found a direction that is new, fun and creatively unique,” they’ve stated. After formally making their acquaintance with the industry in 2015 through their Pay Attention EP, Bruce and Gold, whose paths crossed at Icon Collective, have been on a compelling quest to exemplify just what they’ve claimed.

“Spooky,” which doubles as their latest single and their sophomore one-off of the calendar year, further strengthens this initiative, bringing bass-fluent boldness to its distributor, dotdot. The rumbling Halloween referent would readily nestle in one of RL Grime‘s “Halloween” mix tracklists, but presently adds a touch of crepuscular quirkiness to streaming platforms. Overall, “Spooky” serves as an enticing first taste of um.. style for those unfamiliar with Bruce and Gold’s roving co-initiative, The single invites listeners who’ve not further explored um..’s catalog to get right down to it. And, with Deadbeats and Wakaan among the labels to welcome um..’s efforts, the duo doesn’t come without a substantial co-sign—though this is apparent with just one stream below.

The post um..’s distinctive flair is on full display on ‘Spooky’ appeared first on Dancing Astronaut.