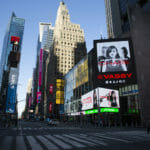 Australian vocalist VASSY is back with a pulsing new dance offering by the name of “Chase.” Produced by ARIA chart-topping electronic duo Bonka, the single stands out amongst VASSY’s discography as a more progressive-natured dance track. The mononymous “Secrets” singer ended up joining forces with Bonka while talking over the phone, reminiscing and missing Australia, she explained:

“I teamed up with the boys as I was feeling very homesick and really missing Australia. Not being able to go back home because of the pandemic and quarantine restrictions that the Australian government placed, we ended up wanting to work on this song together, which was so amazing. It felt really good to make this with my fellow Australians and I am so excited to release this in Australia, as well as the US.”

Now a certified member of the APRA AMCOS 1 billion stream club, thanks to her prized collaboration with David Guetta in 2014, VASSY launches “Chase” via Robbins Entertainment.