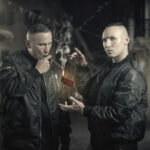 With a handful of dynamic releases spanning the likes of Armada Music, Brooklyn Fire, and Black Hole Recordings, brother duo VRDGO have proven adept at constructing powerful dance-floor weapons that resonate with electronic enthusiasts industrywide. Bringing their multicultural background and intuitive exposure to music into their distinct style, the rave promoters-turned-producers set the standard high early on in the new year with their first release of 2021, “Visions.”

Arriving on their own imprint Estilo Recordings and receiving support from MORTEN on Miami’s Revolution Radio, the latest cut displays the siblings’ electrifying electro and progressive stylization at work. Flourishing with aggressive arpeggiators, pounding four-on-the-floor rhythms, and daunting brass synths, “Visions” emulsifies the darkest of club energies into a production both melodic and hard-hitting. Backed by a slew of electronic mainstays including Hardwell, Carl Cox, R3HAB, Ferry Corsten, Markus Schulz, and more, VRDGO prime themselves to conquer airwaves and sound systems in the approaching months.

This is a sponsored editorial, selectively curated by Dancing Astronaut’s partnerships team in collaboration with our advertisers.