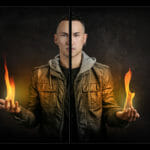 VRDGO are brewing up a storm with their latest single “LIGHT IT UP,” taken from Tommie Sunshine‘s Ignition Vol. 3, released via Brooklyn Fire. The California-based promoter-turned-producers assert themselves with a rowdy electro house rebuttal to their January single “VISIONS,” which arrived on their very own imprint Estilo Recordings. “VISIONS,” their first cut of the calendar year, has since received support from MORTEN, with the future rave mix recently surfacing on Miami’s Revolution Radio.

VRDGO’s “VISIONS” follow-up, “LIGHT IT UP” merges basslines with blaring electro synths for a setlist weapon sure to ignite dance floors worldwide. It’s an audacious addition to the brother-duo’s lineup of originals, which has earned high-class support from the likes of Hardwell, Carl Cox, R3HAB, Ferry Corsten, and Markus Schulz to date. VRDGO detailed the path that took them to Ignition Vol. 3, stating,

“We originally met Tommie Sunshine in Miami at the Winter Music Conference in 2019. We remember how inspired we were after watching Tommie Sunshine & Chocolate Puma perform live in a Miami nightclub during Miami Music Week. It’s been a goal of ours to release music on his label and we finally accomplished that goal. We had a lot of fun in the process of making ‘Light It Up’ as we wanted to make something that was not only fitting for ‘Brooklyn Fire’s’ sound, but that was also going to translate well for DJs, whether they play this track out in a nightclub or festival setting.”

An emblem of VRDGO’s idiosyncratic style, laden with rhythm and bold production, “LIGHT IT UP” can be streamed below.

This is a sponsored editorial, selectively curated by Dancing Astronaut’s partnerships team in collaboration with our advertisers.