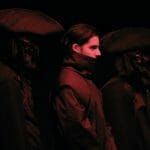 “This is the story of a young and innocent prodigious dancer, on the cusp of becoming a star. During the rehearsal of her first big public appearance, she abruptly realizes that what was meant to be a beautifully orchestrated performance was in fact just a huge money-making production that prioritized profit over art – without much care for the young star and thus shattering the whole vision she naively had of an industry she had once dreamed of becoming part of. She then decides to fight against it, hoping to make a difference in a world where art is a product controlled by immense inhuman forces.”

“Lord & Master” effectively juxtaposes modern electronic music with renaissance-era orchestral elements while the music video candidly depicts the hidden agendas that major business corporations might hold when it comes to art expression. Apashe continues to reap success with Renaissance, amassing a record-breaking 40 million streams and following the LP with a 28-track remix album in February.

LISTEN: Riot Ten And Young Buck Get Heavy On “Mawlee”