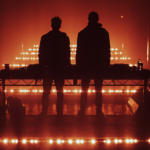 On New Year’s Eve 2020, canonical house music label Defected Records hosted We Dance As One 3.0, a virtual music festival rife with house acts such as Dom Dolla, Eats Everything, and Low Steppa, among others. Though all those who received the We Dance As One 3.0 rang in the new year with soothing, soulful house selects, Gorgon City‘s ID-filled set, delivered live from Printworks, was among the evening’s most preeminent.

Gorgon City’s We Dance As One 3.0 virtual set features six brand new IDs as well as a slew of tantalizing originals, and far as Dancing Astronaut is concerned, there is no better way to set the tone for the day than by threading it with a full hour of house. Watch the full set below.