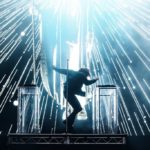 Billed as the headliner for experimental music and arts festival wwFest: VALORANT, Madeon took over the innovative one-day show for a one-of-a-kind live stream, performing amongst a collection of premier dance acts including Dancing Astronaut’s 2020 Breakout Artist of the Year Moore Kismet, WHIPPED CREAM, Ookay, and more. Just a few days later, fans can now experience the performance once more, diving into the entirety of audiovisuals the Crown Channel and Riot-hosted event had to offer.

Madeon’s hour-long set journeys through a kaleidoscopic array of musical selects from multi-genre acts such as Tame Impala, Hudson Mohawke, BROCKHAMPTON, Frank Ocean, and Disclosure, all the while never ceasing to deliver maximum energy. The performance also generously features tracks from Daft Punk as well as from the French prodigy himself, chronicling his discography from “Cut The Kid,” “Pixel Empire,” and Porter Robinson collaboration “Shelter,” to “The Prince,” “Hold Me Just Because,” and unreleased song “No Time For This.” Shapeshifting from the upbeat to the dark-toned, Madeon’s wwFest set both sonically and visually immerses viewers in its cinematically-inspired production.