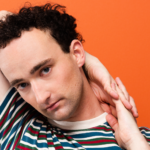 Wave Racer‘s fresh, new expansion of his catalog was not short-lived. The Australian producer, born Tom Purcell, delivers another new single, “What Are We Waiting For?,” offering yet another example of Wave Racer’s impeccable knack for sound design. Purcell says of the track,

“This is the result of a creative exercise involving deliberate restriction—a proof of concept to prioritize process over materials…Composing this ended up challenging my own hesitations surrounding my creative process, hence the title. More broadly, it’s just a really sonically interesting instrumental track, I guess like a study in sound design process, which was super helpful for me.”

Landing on the heels of his widely welcomed comeback single, “Left Behind,” the electronic beatsmith has not only delivered an aced follow-up, but he’s also announced his first headline shows since 2015’s Flash Drive tour. Wave Racer also recently blessed the stage on Porter Robinson‘s Secret Sky Digital Festival. Now, the venerated producer is scheduled to perform at The Lansdowne in Sydney on July 9, and also at The Northcote in Melbourne on July 15. Stream “What Are We Waiting For?” below.

Wave Racer · What Are We Waiting For?

The post Wave Racer flexes his sonic dexterity on ‘What Are We Waiting For?’ appeared first on Dancing Astronaut.

Tagged as astral people recordings, music, Secret Sky Festival, Wave Racer, what are we waiting for.