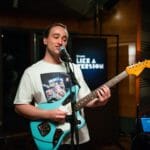 Wave Racer‘s debut LP has landed, and it sees him blending indie soundbites into his electronic staple. Citing The 1975 as his main influence for the record, Wave Racer amalgamates previously released album singles “Left Behind,” “What Are We Waiting For,” “Look Up To Yourself,” and “Dreaming,” with five other tracklistings that he says were “made from a feeling of being at a loose end—like flailing around in the wind directionless, with no anchoring in reality.”

“To Stop From Falling Off The Earth is an attempt to say, ‘this album is going to remind you about the things that you can do to ground yourself.’ And these are the things that have happened to me and have worked for me – this is a story about preventing myself from losing touch with reality,” Wave Racer remarked. Listeners can stream it in full below.

The post Wave Racer unleashes debut LP, ‘To Stop From Falling Off The Earth’ appeared first on Dancing Astronaut.