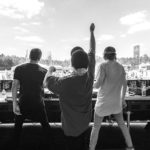 WAVEDASH have unveiled their latest single titled, “By Any Means,” from their forthcoming debut album, World Famous Tour, via NGHTMRE‘s Gud Vibrations imprint.

The Texas-bred trio follow up their previously released track “Stallions” featuring fknsyd, demonstrating yet another alteration of their usual bass and synth-heavy production on their latest single. The production outfit spoke about their latest album single release stating,

“‘By Any Means’ might be a bit confusing to a first-time listener, but, to us, it serves as a stream of consciousness. An apex to the equation and the climax to ‘World Famous Tour.’ It was the first record written for [the album], being the original inspiration for crafting an album—it has an undeniable energy that screams ‘keep going.’”

“By Any Means” is the third single from WASHDASH’s upcoming album, featuring an emotional build-up of melodic elements that progresses and ultimately culminates into theatrically ethereal atmospheres, well worth multiple listens. The outro of the track ends with dubbed audio of “C’est si bon” singer, Eartha Kitt, whose words leave a sentimental resonance on the subject of love and art. Listen to “By Any Means” below.