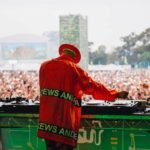 What So Not certainly capitalized in his own way on 2020’s downturn. After announcing an indefinite hiatus last February, the Aussie producer returned home and spent the year clearing his head after an extended stretch of lengthy tour schedules and festival bookings. Hearty doses of sunshine. surf, and studio time has clearly lent themselves to What So Not’s benefit as he returns with his first work since late 2019, an aced trap-leaning remix of Run The Jewels‘ “JU$T.”

The original cut, a standout inclusion on last year’s aptly timed RTJ 4 LP, features contributions from Rage Against The Machine frontman Zack de la Rocha and Pharrell Williams. Keeping the track’s charged up vocal energy intact, What So Not laces in his own percussive modifications to make “JU$T” a more natural fit within a DJ set. Laying his own signature marks on one of last year’s most apropos deliveries feels like the perfect way for What So Not to announce his return.

Tagged as Hip-hop, music, NEWS, Pharrell, Rage Against The Machine, Remix, Trap, What So Not.