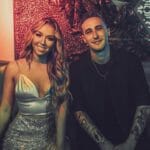 William Black, Dancing Astronaut Supernova HALIENE, and Thomas Laurent stand behind the uplifting “Only One I Need,” an anthem of self-empowerment positioned for summer’s main stages. The single’s lyrical script is centered on “the beautiful moment when you realize you’ve finally crossed the threshold from heartbreak to healing,” HALIENE wrote in a tweet that preceded the triad’s team up. “We can be so consumed by our own pain that we can think of nothing else, until one day we wake up and realize it hasn’t crossed our mind.”

“Only One I Need” succeeds William Black’s recent respective one-offs, “Remedy” and “Deep End,” both of which arrived via Lowly. It also caps off the recent news that both Black and HALIENE will appear at EDC Las Vegas in October, a booking that represents HALIENE’s first solo slot at Insomniac’s flagship event. The former is also slated to play Lollapalooza. Stream “Only One I Need” below.

The post William Black, HALIENE, and Thomas Laurent empower with ‘Only One I Need’ appeared first on Dancing Astronaut.