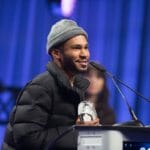 On June 6 in Toronto, Canada, KAYTRANADA‘s BUBBA took the title for “Dance Recording of the Year” at the 2021 JUNO Awards, outpacing originals from REZZ, So Sus, Frank Walker, and Sophie Simmons and Felix Cartal while begging the rhetorical question, “where better to be awarded than in your home country?” Although the Montreal native dropped the project in 2019, BUBBA—which highlights some globally recognized collaborators including Pharrell, Estelle, and GoldLink, among others—still qualified for the 2021 JUNOs.

See the full list of JUNO 2021 winners, including Caribou (winner of “Dance Recording of the Year” for Suddenly, ranked among Dancing Astronaut‘s Top Electronic Albums of 2020) here.

The post Winningest legacy of KAYTRANADA’s ‘BUBBA’ widens with 2021 JUNO Award for ‘Dance Recording of the Year’ appeared first on Dancing Astronaut.