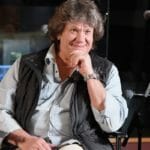 Following a hard-fought battle with a rare form of non-Hodgkin lymphoma, Woodstock Music and Art Fair co-founder Michael Lang passed away on January 9 at 77 years of age. He is survived by his wife Tamara, their sons Harry and Laszlo, and his daughters LariAnn, Shala, and Molly.

Lang attemped to host a Woodstock 50th anniversary event in 2019, but after an exorbitant series of obstacles including artist cancellations, permits, and production issues, the festival was cancelled.

Lang and his co-planners expected a crowd of 100,000 people for the 1969 festival, but were instead joined by upwards of 350,000 attendees. The event was free for all and promoted “three days of peace and music,” according to original flyers. With a lineup featuring Janis Joplin, Crosby, Stills, Nash & Young, Creedence Clearwater Revival, Jimi Hendrix, and more of music history’s most beloved figures, Michael Lang’s legacy will forever be ingrained in the hearts and minds of music lovers from all walks of life.