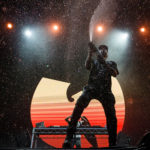 As excitement builds for the return of live music events across the country, Wu-Tang Clan has slapped an even wider grin on concert-goers faces with their grand return at Red Rocks Amphitheater. The world-renowned venue finally opened its’ doors back in April to less than 50% capacity. Starting June 21, the Rocks will return to full capacity and two months later, on August 13, it will welcome in the famed New York City rap deities to the stage.

The highly anticipated show will feature reimagined versions of Wu-Tang’s most iconic songs from Colorado Symphony Orchestra. If that weren’t enough to sell out the venue, joining Wu-Tang Clan will be Outkast‘s Big Boi as well as Colorado turntablist extraordinaire DJ Chris Karns.

Grab your tickets to this unique concert experience here.