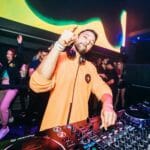 Wuki has reached a new career benchmark: the realization of his debut studio album, WukiWorld. Released via HARDRecs, the 10-track LP taps into dubstep, trap, Jersey club, house, and even rock. The former Innerpartysystem band member takes a no-holds-barred approach to production from the songs’ arrangements to their features, recruiting Shaquille O’Neal, Diplo, Juvenile, Smokepurpp, Softest Hard, Stoppa, and more to guest on his first long-form. WukiWorld can be found in its full genre-evading glory below.