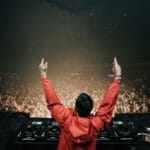 LA-based yetep has delivered a towering collaboration with Squired and Danni Carra titled “Call It Quits”—all three of which are making their debut on Ophelia Records. The single follows the producer’s emotionally charged Broken EP released on Subsidia Records in February. “Call It Quits” carries forth an engaging blend of melodic bass and hard-hitting theatrical sonics.

“Call It Quits” combines the intense soundscapes of yetep and Squired as the pair circumvent traditional melodic bass tropes by bridging mid-tempo rhythms alongside Carra’s enveloping vocals. The trio have all previously collaborated on separate projects as their latest track “Call It Quits” takes a powerful step forward in expanding Ophelia’s well-rounded lineup of emerging dance artists. On the release, yetep stated,

“Squired and I wrote ‘Call It Quits’ two years ago. Funny enough, we were going to release the song as an instrumental, but we decided against it for about [a year and a half]. We ended up working with Danni and after hearing what she had done, it was clear that the song needed the vocal that you hear today. You definitely hear that melodic side that you’re familiar with my music, but I think it’s a great balance of trap you hear from Squired. I hope you guys enjoy the song as much as I do.”

Listen to “Call It Quits” by yetep, Squired, and Danni Carra in full below.