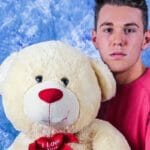 Disco has always weaved its way in and out of popular culture since its introduction in the 1960s. Beginning as a counterculture to the rock music that dominated throughout the time, Black, Hispanic, Latino Americans, Italian Americans, and gay men championed the genre, twirling nights away across neon-clad dance floors. Permeating into today’s sounds, Yung Bae offers a new disco-drenched take with the likes of Channel Tres in tow.

Yung Bae and Channel Tres‘ new single, “Wonder,” breathes fresh air into the charm of 1970s disco. Fit with cinematic instrumentals and velvet vocals, “Wonder” acts as a track removed from time. In a year that has seen many commercially viable albums influenced by disco, including Dua Lipa‘s Future Nostalgia and Thundercat‘s It Is What It Is, “Wonder” propels the revival even further forward. The modern influences only add to the track, and are included with a light touch, allowing “Wonder” to maintain an atmosphere of evergreen timelessness.

Channel Tres recently joined Polo & Pan for their track “Tunnel” and he also recently collaborated with Flight Facilities on “Lights Up.” The artist had also been tapped by Grimes back in January to remix her Miss Anthropocene single “Delete Forever” for Miss Anthropocene Rave Edition.